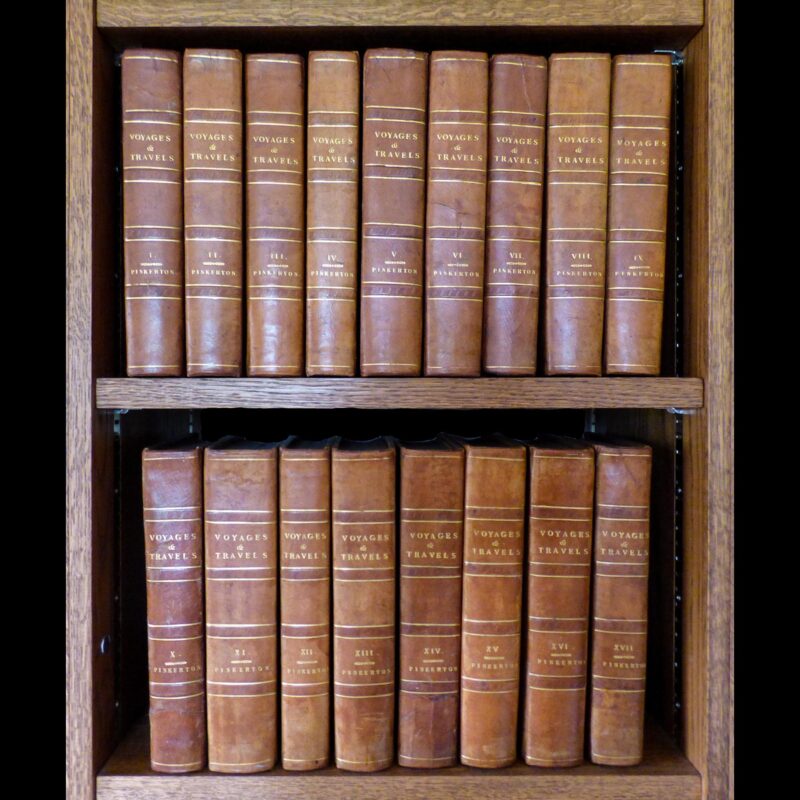 A General Collection of the Best And Most Interesting Voyages And Travels In All Parts of the World; Many of Which are now Translated into English. Digested on a New Plan. Illustrated With Plates

Many of Which are now Translated into English. Digested on a New Plan.

“A collection of great merit and importance. Several northern voyages are included in the first volume, and volumes XI to XIV… relate mostly to America…” (Sabin ), with chapters on the Discoveries and Settlements of the English in America, Discoveries and Settlements of the English in America.Martin Frobisher’s First, Second, and Third Voyages in search of the North-West Passage to China, 1576-1578, Greenville’s Voyage to Virginia for Sir Walter Raleigh, Captain John Smith’s Virginia and New England, Peter Kalm’s and Burnaby’s Travels to North America, William Dampier’s Voyages, particularly to Australia.

He was born in Edinburgh, as one of three sons to James Pinkerton. He lived in the neighbourhood of that city for some of his earliest childhood years, but later moved to Lanark. His studious youth brought him extensive knowledge of the Classics, and it is known that in his childhood years he enjoyed translating Roman authors such as Livy. He moved on to Edinburgh University, and after graduating, remained in the city to take up an apprenticeship in Law. However, his scholarly and literary inclinations led him to abandon the legal profession. It had been during his brief legal career though that he had begun writing, his Elegy on Craigmillar Castle being first published in 1776. In 1781, Pinkerton moved to London, where his full career as a writer began in earnest. The Collection of Voyages and Travels is his most important work. Sabin 62957

For news of trade exhibitions and interesting aquisitions